A downloadable game for Windows, macOS, Linux, and Android

June, 2004
Daichi Ibato has had a peaceful and uneventful life in the city, but he feels like he lacks direction compared to others his age. Things take a dark turn when he's forced to leave his home after an argument with his mother. After a chance meeting with a businessman, he moves in with him in the countryside, agreeing to take care of the man's father as repayment. But as Daichi begins his new life with the Kagemori men, he can't shake the feeling that something is off. Just as the shadow of the Grave Tree hangs over the town, a similar dark presence seems to be cast over Kenji and Rintaro. With strange people urging him to leave, Daichi must make a choice: Will he turn a blind eye to the shadows that haunt the Kagemori family, or will he seek the truth and bring them to light?

The Remorse Chapter ~ Tsumihanseishi-hen:
Daichi easily falls into his role as caretaker for Rintaro, and finds himself drawn to the man in other ways. But things are not all well in his new life. Not after a strange man warns Daichi of the dangers of the Grave Tree…

The Heartmending Chapter ~ Kokoroiyashi-hen [COMING SOON]
While he promised to do his job earnestly, Daichi finds himself utterly bored with taking care of Rintaro. After spending some time with Kenji, he feels something draw him towards the man. But in the midst of this blooming romance, a mysterious woman warns Daichi about getting too close to the Kagemori men…

Just played through the Rintaro route. Wow.
(the afterparty was hilarious, though since i only played one route so far, it revealed a bit)
I was chatting about it and screencapping to a friend the whole time.

Can you date Kenji ?

Well the exception occured pop up and i ignored it and yeah the game continued but there were scenes that was cutted tho, the game was good i enjoyed it ❤️

Is there more than one love interest? or is it just Rintaro?

Next update adds the first part of Kenji’s route

When will the next update be posted?

Gah, guess I need to get to updating sooner than I had expected.

Something to do in the next few days I guess...

So it's gay romance jammed in a Higurashi vn?

A little more nuanced than that. I took inspiration from the WTC series ( Its name following a similar pattern to Ryu’s own works) but there’s really no overlap. Higurashi is the story of a village and it’s secrets, WtWDR is the story of the Kagemori family and it’s sordid history.

Hmmm. Try redownloading the game. If the issue continues I’ll do a quick update to try and fix it

Its still happening though

Damn, guess I’ll need to push an update. Alright, I’ll try and have a new build up by the end of the day.

Kenji's turn is coming up soon enough, I've just been busy working on his arc. He'll be getting plenty of love this time around.

As for running off with the two of them...let's just say that you won't solve anything like that V;

is the game going to get any uploads? :(

Updates? Yes. I plan to have a new update out by November. It's been a long time coming, that's for sure.

Is there any errors that occur when you try to? If there is, please screenshot it and post it here so I can help.

Umm, just curious but is there any guide for the game?? (○ﾟεﾟ○)

Getting everything is rather simple, but if you need some help I'll explain the system.

If you've already gotten the true end, just pick the opposite of what I said and you'll unlock the bad end :P

Oh ok, thanks so much. OwO

Hi, I leave some feedback on LSF. It'd be cool if you check mine too :)

can´t wait for the uploads!

Yeah sorry I mean the next updates. Sorry, not english haha.

I really liked the story. But how do I get any good ending?

There isn't one. No matter your choices, Daichi's relationship with Rintaro will always end in tragedy. The only thing I want people to ask is "Why do things end like this?" Because by asking that question, they can enter the next arc to be released with an open mind and begin to dig deeper into the family's history to learn firsthand why this story has no happy ending.

Why giving the choice in 3 places then, if they all lead to different bad endings? The boy just wanted to be honest to himself and everyone and wanted some fun, cannot judge him for that. In fact, this story, at least its first part, resonates with mine a lot and I liked it. But when I realized that it leads to a tradegy no matter what you choose - it made me sad and angry. It sort of depressive.

The choices decide if you see the true or bad ends. There's a point system in-game. Get below a certain score and you get the bad end. And there's no issue in Daichi's desires. Its just that he became involved with the wrong person. I wish I could explain more, but we'd be entering spoiler territory in things that I have planned. Just...grin and bear the pain for now. Once all the arcs are out, it'll make sense why things ended the way they did and maybe you'll get that happy ending you want.

Now what gave you that idea?

well, kenji asked daichi to spend some time with his father but he's really pissed when he realises what's going on... And it doesn't seem like kenji connects some good memories with his father's ex lover. So I think, he becomes jealous not when someone spends time but when someone has an affair with rintaro...

Kenji’s reaction to being asked about Aoba is surprise because “How does this guy who’s lived with us for a few months know about someone I knew over a decade ago?” But when reminiscing, he’s happy about it because, as he said “Although [he] lost [his] mother, it felt like [he] still had both parents.” And it’s then that he realizes that Rintaro and Aoba were more than friends, and Kenji is disappointed that his father wasn’t open about the relationship.

As for his “jealousy” Rintaro really is spending less time with him. Imagine if the only person in your life started telling you “I can’t hang out, I have other things to do” and starts to distance themselves. Meanwhile l, your new roommate is getting all schmoozy with them. Not hard to put two and two together and figure out why you’re getting ignored.

Just hoping for a little bit prolonged narration at the end, but the story itself is already wrapped handsomely with its mystery and (dark) sentimentality. Furthermore, I like that the Prologue actually could be interpreted as part of the Ending if only it didn't mention the wounded eye, and the song at the Credit suits the ambiance of both Endings :')

P.S. I notice that the Extra didn't unlock itself. Is that an intentional part that will be updated in further date, like in your another game (Death Rule)?

Hi there! I had an idea for an epilogue regarding the True End, but figured it best to end the story there because as far as the mystery is concerned, that is the end. What happens afterward is just the aftermath of their choices.

The prologue will tie back to the story once I reveal more, but it’s cool you found a parallel between the events of the bad end and the prologue. And yeah, when i heard that track I was like “This needs to be the end theme for the game!”

It’s to be unlocked in Patch 1.1. Had to omit it in order to get the first arc out for the jam. Should come within the next week or so provided I don’t run into issues? With the Extras unlocked, you’ll also understand why there were some hilighted bits of text during the game.

Ah, I see, I tend to overthink things even after the closure of the story, and for this leads some thoughts like : But how about the murder of Saiko?? Will Rintaro come clean about that and what's Daichi's reaction? *calming down*Anyhow, it is your work of storytelling that do well and let me immerse to the scene, the overthinking is only side-effect :'D

I was guessing that there would be a kind of glossary regarding the highlighted text. Take your time in composing the Extra, I'll stay tune ^^ 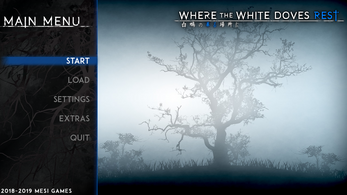 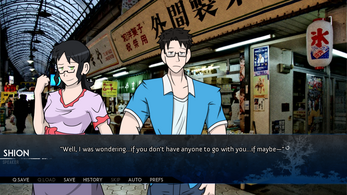 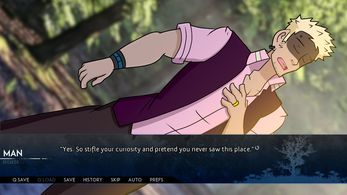 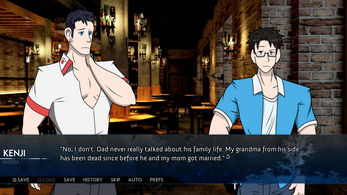 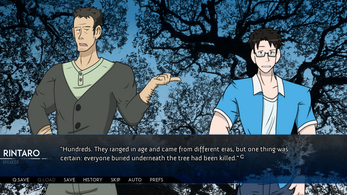